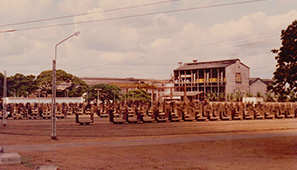 2001 Golden Jubilee for the group was presided by Shri Nara Chandrababu Naidu, Hon Chief Minister of Andhra Pradesh and lauded the efforts of The Andhra Sugars Ltd., towards the development of the state’s industrial growth.

The Journey was also made special as the organisation holds a dubious distinction to be the first unit in the country to introduce the diffusion system and continuos centrifugal. The process adopted in the Acetic Acid / Acetic Anhydride plant, a combined process, is one of its kind in India.

While the business was expanding and milestones were created,  the organisation also focussed on the welfare of the employees through setting up of school, polytechnic, canteen, staff quarters, co-operative stores, temple, development of roads, 450-bed hospital and so on.